Well it's been a while, hasn't it?
We're still here, after a few months of work the first playable test build of X-O-N-G will be uploaded tonight.
Personally, Carson is prepping for college while the rest of the team is finishing college and prepping to work on games after college.
Thank you to everyone who's been hanging out with us this early, and we hope you're blown away but what we'll do in the future.
We're also going to find a better way to talk to people who play our games; through Twitter or a better blog or telekinesis.
For now, the X-O-N-G page is up. It's an early demo, and there are some bugs that will be worked out in the next one, the same deal as Dumb Dojo
Since we created it, this site has over 30k views, and tons of downloads. Thank you all so much.

X-O-N-G
Scratch the past entry, we're keeping the GW name.
We're working on something new. It's called X-O-N-G. It'll be at an event in NYC soon, stay tuned!

Now that the Dumb Dojo Local Multiplayer Combat Build has been out, we've been taking some time to reflect on the past year at GWHQ
We've had a ton of fun working on Dumb Dojo, and can't wait to start the next project.
Our roadmap currently has us headed toward a single-player Steam release for Dumb Dojo. More on that later.
We also have...something else. That will have a quicker development time then Dumb Dojo. It'll also be a better game.
There also may be a bit of a branding change soon, so stay tuned!

The Dumb Dojo Local Multiplayer Combat Build is here, for real this time! Sorry for the false alarm before. We picked up on a few stray bugs here and there that are now gone, and added a countdown timer.
Everything from the previous post is still true, it's just that we're actually making the game available now.
Unless we find something crazy, this is the final build of Dumb Dojo before the Single Player Steam update. Expect that in like, June.
Between now and then, we'll have something else to share. And can't wait for you to see that.

The Dumb Dojo Local Multiplayer Combat Build is here! We just finished work on the free, local multiplayer build of Dumb Dojo. Making this game has been a life-changing experience for all of us.
We learned so much, and can't wait to use that knowledge in a new game, hopefull with a faster development time.
From here, this build will be updated ocassionally, send any bugs to actuallykronosaurus@gmail.com so we can fix them
We're gearing up for a full-fledge single-player Steam release. There will be more news as things happen
Expect the presskit to be updated, a trailer to be launched, and more details to show up soon.
Thank you so much to the over 20k people who have visited this site on this journey, you have changed our lives in a pretty huge way
We hope our game changes yours at least in the slightest.
Thank you

Thank you Indiecade!!!!
The Dumb Dojo community-pop-up slot at Indiecade was awesome. For those who are here from that, welcome!
To follow up with Kronosaurus (the dude you met there), send an email to actuallykronosaurus@gmail.com
The game launches soon, and the indiecade patch beta build will be up shortly.
Thank you so much for coming out to Indiecade.

Dumb Dojo will be at IndieCade East at the Museuem of the Moving Image tomorrow from 10:30 to 1:30.

We're planning a big move to another site/brand, we'll have more news on that soon as we start to promote Dumb Dojo
We're gearing up for the launch of Dumb Dojo, expect it by March, we're sorry about all of the early release dates, it's our first time launching a game
Dumb Dojo will be at Indiecade East 2018 on Sunday at the Community-Pop-Up Shop. Come out and play one of the final versions of the game before launch
Keep it locked here, we're still working on that branding change and will keep everyone updated.

Dumb Dojo is soon, we've been completley rebuilding the game from the ground up (whoops)
Expect a trailer soon, hopefully with a release date. There will be a subreddit and discord channel to stay up to date with the latest news soon
The game will be done and out before the 2nd week of March, we promise

Dumb Dojo will release soon, we're aiming for January 10th 2018.
We've been working very hard on it, and have completley rebuilt the combat, menus, and art from the ground up
We want this game to be complete and out, but also the best it can be in the time we have. Thank you for your understanding.
There will be more details shortly, along with a playable tech/combat demo and more press things.

Dumb Dojo's new look will be at Playcrafting NYC on Saturday 10/28!
Come check out 28.3, the last build before launch!
Speaking of launch, we're planning to launch Dumb Dojo right here at Ghostwhale.rocks and
on itch.io!
A Steam relase will happen a few months after the inital launch

Dumb Dojo launches soon. Be ready to Enter the Dojo.

Yep, you read that right, Dumb Dojo is still here, while a lot of the changes that this patch brings are internal
there's still a lot of us to talk about in terms of bugfixes and changes.

This is an experimental build, there are still a few issues to be fixed here, but they'll be fixed soon

Fixed lots of bugs in terms of 4 player "balance"


Rebuilt respawn system for four player, players now spawn in a pesudorandom location and the match continues after a player loses a stock


Made a lot of progress in story mode, full release coming soon


No gamepad input to select a stage in four player, so the keyboard must be used

So you might've noticed we've been a bit inactive, mainly because we're very busy with Dumb Dojo & Project L.
This isn't very exciting for anyone, and it keeps you awesome people in the dust, so we're happy to announce the GhostWhale Tales!
Along with announcements and patch notes, a weekly dev diary is going to be written and released this thursday, and every thursday after that untill some horrible catastrophe.
See you then!
(Thursday, not during the catastrophe).

Hey everyone, Ghost Whale team here! We have a ton of news regarding Dumb Dojo!


Despite our silence, we've been VERY hard at work making sure that Dumb Dojo is progressing steadily through its development schedule, which can be found here!


To show off some of this new work, we've released a new version of Dumb Dojo! Here are your patch notes for v 1.27.0!

Added native controller support! (A previous version with support was uplodaed to the site, we just forgot to put up the patch notes.)

Fixed some bugs between character-specific game crashes. All characters should work properly now.

Fixed some bugs to do with knockback in 4-player.

Moved some blocks on the 2-player version of cave. (Because of Sean.)

Added in pseudo-random spawn-boxes for each stage and each player.

Did a lot of minor bug fix work, but there's still a lot more to be done.

Music won't play during some 4-player matches. Through extensive testing, this issue does not seem to be true for two player.
Sometimes, 4 player freezes. We're working on that.
Some characters don't handle their controllers being unplugged very well (certain animations don't play if a characters controller is unplugged or plugged-in mid-match).
Possible instability regarding the latest patch and 4-payer. Send all bug reports/freezes (preferably with screenshots) to www.actuallykronosaurus@gmail.com

Thank you to everyone at Playcrafting Expos and on the internet who have supported the game so far!

This new Dumb Dojo update fixes a number of bugs, and adds some knockback!

We didn't even notice, but IGDA Adelphi made a little blog post about Dumb Dojo's appearance at playcrafting! 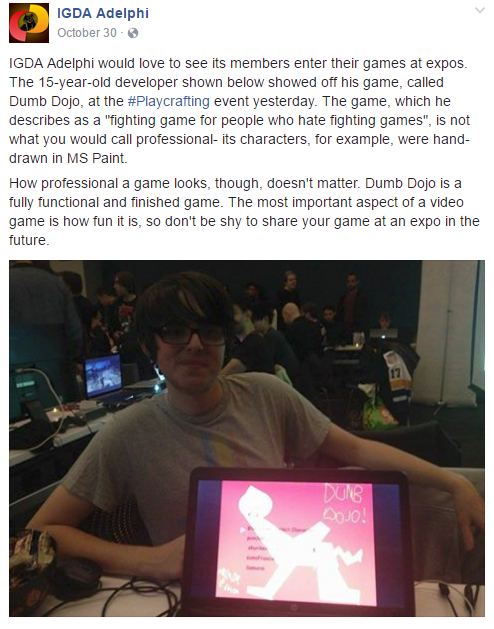 Huge thank you to Emily (who wrote the article). Stay tuned to the site for a new trailer and more news!

The 4 Player Update went through some changes to make it actually work. Here's a list. Apologies for releasing it before we tested it before all of the bugs
Fixed a bug when player 4 lost.
Fixed some balance issues
Added some native controller support

Player one punchman sprites might not show up due to testing with controller support, will be fixed soon

Samurai (players 1,2,3 and 4) and all characters for players 3 and 4, don't have win animations

We've been working hard on the 4 Player update, as there's a lot to be done.
The Dumb Dojo Trello Board is up so you can check our progress on things!

Thank you so much to everyone who stopped by and played Dumb Dojo at Playcrafting! We're super hyped to keep working on the game for you dudes!

The official Dumb Dojo...Dojo steam group will be up shortly, and Kron will be doing and AMA on there soon!


The 4 player update is in development! Keep checking the steam group to see when the next livecoding twitch stream will be!


Huge shoutout to Dan and the rest of the Playcrafting team for an awesome night of battles!

Dumb Dojo will be at Playcrafting in NYC today!!!! We fixed some bugs before the showcase!
Fixed a glitch where the match wouldn't start after the v.s screen.
Fixed a glitch where ninja stars would bounce off of samurai.
Fixed a "balance issue" between blue and green samurai.
Added bass to some sound effects.
Minor text fixes.
removedglitchgremlin

Changed the color of the boat blocks and temple blocks

When samurai wins, the respective punchman is shown on the trophy screen instead of samurai.
The "winners don't do drugs sound" plays at the main menu when the sceren is skipped.
Both are easy fixes, we just don't have the time to fix them currently.

So the last update didn't squash all of those peky bugs, this pretty much does the trick!

Fixed Samurai's collisons (Some stars went through, other stars bounced without a shield out etc)

Since the bug fix update is no longer the current update, it cannot be downloaded from the main page. Use this link instead.


This is just a little update.


Added an extra block to cave

Drum loop restarts when the controls screen is entered

After spending roughly ten minutes searching for "samurai puns" on google, I decided to introduce Dumb Dojo's newest character like this: Hey guys, Dumb Dojo has a samurai, he can block ninja stars! Yay! Here are the patch notes for Dumb Dojo Update 1.21.0:


Enabled Developer mode, kept the way to acess it a secret